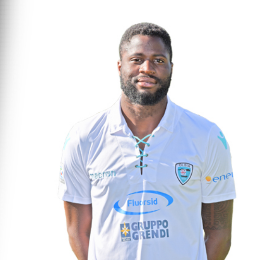 Through a press release, Italian Serie C side Olbia Calcio 1905 have informed that they have reached an agreement with Roberto Ogunseye for the extension of his contract.
Ogunseye's new agreement will keep him at Olbia Calcio 1905 until the end of the 2020-2021 season.
Since his arrival at the Sardinia based outfit, he has appeared in 68 official matches, scoring 24 goals while providing eight assists.
Ogunseye has been rewarded with a new deal on the back of his blistering start to the season that has seen him find the net five times in four games across all competitions.
The 24-year-old played for the youth teams of Inter Milan prior to his move to Olbia in January 2017 and played on loan at Marano, Montebelluna and Prato during his time at The Nerazzurri.
The center forward was born in Mantova and eligible to represent Italy at international level.
Ifeanyi Emmanuel
Photo Credit : olbiacalcio.com