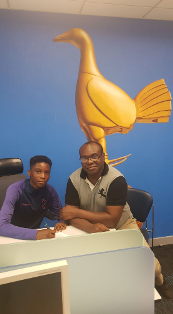 Allnigeriasoccer.com can exclusively report that Tottenham Hotspur have beaten their London rivals Chelsea to the signature of highly-rated Nigerian youngster Temidire Emmanuel Okuwa.
The 2006-born player completed his transfer to Tottenham this week and will represent their U14 team in the 2019-2020 season.
Okuwa can be considered a versatile player as he can play several positions in defence competently and is comfortable playing as a central and defensive midfielder.
At the end of the 2018-2019 campaign, the promising teenager departed West Ham where he has been since nine years and went on trial at both Chelsea and Tottenham Hotspur.
He opted for Tottenham Hotspur over Chelsea due to the pathway from the academy to the first team and for development reasons.
Okuwa joins Timothy Eyoma, Joshua Oluwayemi, Jubril Okedina and Kion Etete at the Tottenham Hotspur Academy.
Ifeanyi Emmanuel