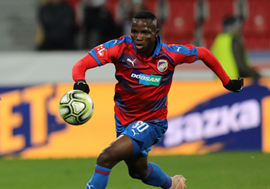 Through a statement published on their official website, Czech First League club SK Dynamo Ceske Budejovice have announced the capture of former Nigeria U23 international Ubong Ekpai on loan from Viktoria Plzen.
The winger will play on loan at SK Dynamo Ceske Budejovice until the end of 2019.
Viktoria Plzen have decided to loan out the Nigerian to gain match practice as he is in the final phase of his recovery from injury which limited his appearances to 16 games last season.
In addition, Viktoria Plzen have fewer games to contest following their elimination from the Champions League and Europa League.
Ekpai previously played for Akwa United, Kano Pillars, Maccabi Haifa, Slovan Liberec and FC FASTAV Zlin.
He is famous in these parts for netting the winner for the Dream Team VI in a friendly against Brazil U23s in March 2016.
Igho Kingsley
Photo Credit : dynamocb.cz