...the complete Nigerian football portal
Subscribe
Golden Eaglets Invitee Gets On The Scoresheet For Arsenal Against Chelsea
Published: September 07, 2019 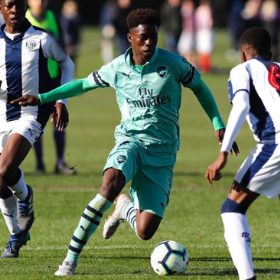 The reputation of promising Nigerian attacking midfielder Malcolm Ebiowei continues to grow and everything indicates that he will be offered a scholarship at Arsenal before the year runs out.
The 2003-born player got on the scoresheet again as Arsenal U16s registered a 3-2 win against their Chelsea counterparts.
Last month, Ebiowei was involved in four goals as the Young Gunners thrashed Aston Villa U16 5-0, scoring one goal and setting up three others and also found the back of the net in a 3-1 win against West Ham.
Eligible for Nigeria, England and Netherlands, he is proud of his Nigerian background and has the West African country's flag on his Instagram profile.
He was handed a maiden call-up to the Nigeria U17 squad last month but several factors contributed to his decision to skip the ongoing training camp in Abuja.
Ebiowei made his competitive debut for Arsenal U18s last weekend as they suffered a 1-0 loss to Southampton, coming off the bench in the 67th minute.
Ifeanyi Emmanuel
Photo Credit : instagram.com/malcolmebiowei