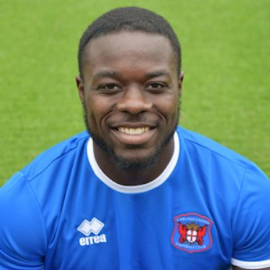 Catch up on the Nigerian players that were on target for their respective clubs in the EFL League One and League Two on Saturday, September 7.
John Akinde took his tally for the season to two goals in seven appearances but his goal counted for nothing as Lincoln City were beaten 3-1 by Wycombe Wanderers at Adams Park.
Four minutes into the second half, the 30-year-old fired home to make it 2-1 and the referee allowed the goal to stand despite a player down with a head injury.
Akinde had two different loan spells at Wycombe Wanderers during his time at Bristol City.
In the fourth tier of English football, former Arsenal schoolboy Olufela Olomola made it three goals in six games for Carlisle United as they suffered a 3-1 loss at the hands of Exeter City.
In the 61st minute, Fela headed home a rebound after goalkeeper Lewis Ward had denied Nathan Thomas.
Ifeanyi Emmanuel
Photo Credit : carlisleunited.co.uk