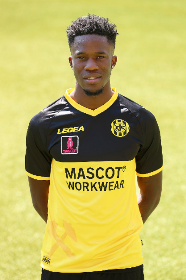 Dutch Eerste Divisie side Roda JC finally put an end to their winless home streak, thanks to a 2-1 victory over TOP Oss on Sunday afternoon.
The Parkstad Limburg outfit had gone five months without a win in front of their home fans but the unwanted run of results eventually ended courtesy of  Chelsea loanee Ike Ugbo whose first-half goal was enough to hand his team the maximum three points.

Roda JC opened the scoring in the 3rd minute through Richard Jensen, before the Nigeria-eligible forward extended the lead in the 41st minute.

Though TOP Oss found the back of the net in stoppage time via Philippe Rommens' strike, it turned out to be a mere consolation as Roda held on to victory.

Ugbo, who was playing in his fourth game of the season, has now scored two goals so far and he will hope to continue his brilliant start to the campaign.

Jean-Paul de Jong's side now have four points from five matches and they currently occupy the 17th position, pending the outcome of other matches.