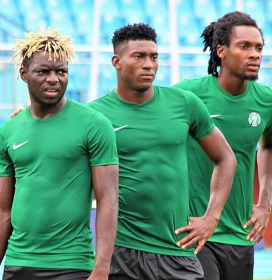 Allnigeriasoccer.com's Izuchukwu Okosi rates the U-23 Eagles stars who sidestepped Sudan to reach the 2019 CAF U-23 Eagles AFCON In Egypt after a 5-0 mauling at the Stephen Keshi Stadium, Asaba.
The Starters
Goalkeeper
Adamu Abubakar : The Nigerian keeper was largely untested throughout the game. His first effort at smothering the ball was in the 30th minute. 7/10.
Defenders
John Lazarus : The right back had a good defensive awareness and offered offensive support down the right side for the Eagles. 7/10.

Ebube Duru : The left back assisted Ndifreke Effiong's second goal with a perfect low cross into the Sudanese box. Solid in defence. 8/10.

Olisa Ndah : Not overly a spectacular game but one with few defensive errors. 7.5/10.

Anthony : Good performance but culpable a few times in losing possession. 7/10.
Midfielders
Azubuike Okechukwu : The captain of the game offered leadership and experience for the Eagles. Was in defence and a ball carrier for the team. 8/10.

Kelechi Nwakali : The former Arsenal midfielder who has been signed by Spanish side Huesca caught the eye with a spectacular game as he assisted one goal passed the ball around the pitch with grace and elegance.

Booked for a foul before he was substituted off. Super Eagles beckoning. 8/10.

Ndifreke Effiong : Two goal hero, one with a header and the other a close range effort in the first half. Had a few other chances in the second half but they came to no fruition. 9/10.
Strikers
Muyiwa Olabiran : The winger was lively and even though he did not score, he was a threat for the visitors with his pace and footwork. 6/10.

Taiwo Awoniyi : The Liverpool owned striker at loan at Mainz 04  grabbed the opening goal with a textbook header and was a physical nuisance for the Sudanese. 7/10.

Ibrahim Sanusi : The NPFL hotshot of last season scored a goal in the second half, the last of the game. He showed flashes of brilliance. 6.5/10.

Sunday Faleye : The forward scored with his first touch of the ball after he came off the bench. He also assisted Ibrahim Sanusi's goal. 8/10.

Fatai Gbadamosi : Came off the bench in the second half. Calming influence in the period he saw action. 5/10.

Stephen Odey : The former MFM striker was another second half entrant. He missed a chance to score and was lucky not to have been booked for simulation as he fell theatrically in the box towards the end of the game. 5/10.