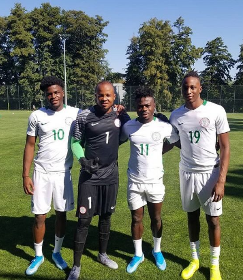 Glasgow Rangers star Joe Aribo had a memorable debut for the Super Eagles, scoring after three minutes as Nigeria surrendered a two-goal lead to draw 2-2 with Ukraine in an international friendly on Tuesday evening.
The central midfielder has gone from strength to strength following his move to Rangers in the summer transfer window and has now scored five goals in total for club and country since the season started.
With Obi Mikel calling time on his international career after the 2019 Africa Cup of Nations, manager Gernot Rohr has been in search of a replacement for the Chelsea legend.
Excited Super Eagles fans believe the search is over with Aribo's eye-catching display against Ukraine and are tipping him to step into the shoes of the former Super Eagles captain.
Here's what some Super Eagles fans said on Twitter after watching Aribo make his international debut :
@Tv_Olonimoyo : ''I think I like Joe Aribo on the ball. He looked like young Mikel at times. #UKRvNIG''

@JackFleet : ''Joe aribo is a perfect replacement for Mikel obi. Victor osimhen is a power house''.

@dr_spex : ''This was a great match. So we had Joe Aribo and we took mikel to Nations Cup''.

@Young_Iriv : ''The way Joe Aribo holds the ball reminds me of Mikel in his early days. Such a talent. #UKRNGA''.

@o_jayfrank : ''Joe aribo is good, could be a replacement for mikel #UKRNGA''.

@iamdouglaseze : ''In Joe Aribo,  Nigeria has finally found that No.10 replacement for Okocha. What we thought we had in Mikel. His b2b runs are tremendous. A new star is born!''

@gbenga3nity : ''Joseph Ayodele-Aribo is such a joy to watch. A proper sensation that's coming in right on time to replace John Obi Mikel. #SoarSuperEagles.''