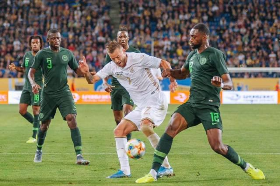 Speaking to reporters after Nigeria were held to a 2-2 draw by Ukraine in an international friendly in Dnipro on Tuesday evening, Super Eagles coach Gernot Rohr admitted that it was a game of two halves.
The three-time African champions dominated proceedings in the first half, with Joe Aribo and Victor Osimhen getting on the scoresheet but threw away their two-goal lead in the space of one second-half minute.
''A wonderful test match. Both opponents demonstrated high-quality football. We won the first half, but Ukraine played at home, so the result is logical,'' Rohr stated.

''After the break, the opponent did much better. Would I like to be grouped with the Ukrainian team in an official tournament? No.
''This team is on the 25th place in the FIFA ranking, leads in its Euro 2020 qualifying group and, most likely, will advance into the final part of the European Championship.''
Next up for the Super Eagles is a 2021 Africa Cup of Nations qualifier against Benin in November.
Igho Kingsley