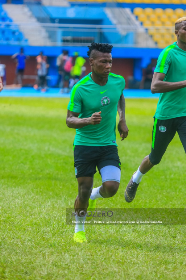 Dynamo Kiev's Ukraine defender Oleksandr Karavaiev believes the penalty won by Samuel Kalu in the first half of their 2-2 draw with Nigeria should not have been given by Italian official Paolo Valeri.
Although television replays suggested otherwise, Karavaiev argued that Kalu crashed into him and the Nigeria winger wasn't fouled before falling to the pitch.
''The episode from the penalty ... I stopped, did not put up a foot, nothing - he just hit me,'' Karavaiev was quoted as saying by Football.ua.
''The referee gave a penalty in favor of the attacker, this is his decision. Next time I’ll play more carefully, I’ll work on mistakes.

''The mood after the match is good, because we showed character, created a lot of moments in the second half and could win the match. They did not give up, showed their game and achieved a draw.''
Nigeria established a two-goal lead by the 34th minute courtesy of goals from Joe Aribo and Victor Osimhen but the match ended in a draw after the visitors conceded two goals in the space of one second half minute.
Igho Kingsley