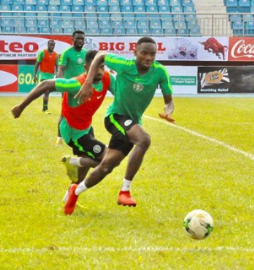 Former Arsenal midfielder Kelechi Nwakali says he is still the heir apparent to John Obi Mikel and is a targeting a recall to the Nigeria national team ahead of the start of the 2021 Africa Cup of Nations qualifiers.
The Diamond Academy product is one of the players tipped to replace the retired Mikel in the Super Eagles but manager Gernot Rohr did not look his way when he announced his roster for the recent friendly against Ukraine.
Though Nwakali has not played competitively this season, he sparkled as the Dream Team VII qualified for the U23 Africa Cup of Nations following their 5-0 rout of Sudan in Asaba on Tuesday.
''I am still the heir apparent (to Mikel),'' Kelechi Nwakali told reporters post-match.
''I believe my own is to do the playing and whenever it is time for me to come I am always available.
''It is always an honour to represent Nigeria. Of course, I am still knocking on the door of the Super Eagles, that's why we keep playing every day.''
The new SD Huesca signing has captained the Golden Eaglets and Flying Eagles in the past and knows what it takes to prepare for major tournaments including the U23 AFCON which holds in Egypt in November.
''The only thing I have to say is the Federation should support the team, the coach I believe he knows what is at stake.

''The main thing first is to go there to pick up the ticket to the Olympics, even if we don't win the competition, picking up the ticket is the most important thing, so one step at a time,'' Nwakali added.
He concluded by praising his teammates and Nigeria U23 coaching staff led by Imama Amapakabo for the big win against Sudan.
''Personally I take every game to improve myself, I know that footballers we can have bad days but we try all our possible best to make every game count for us.

''We put up a good performance to turn the game from 1-0 to 5-1, I must commend the coach, he did a very good job during the training sessions and the team as a whole for putting up a good performance.''
Kelechi Nwakali was named in an official Nigeria squad for the first time in August 2018 ahead of an Africa Cup of Nations qualifier against Seychelles.
Ifeanyi Emmanuel