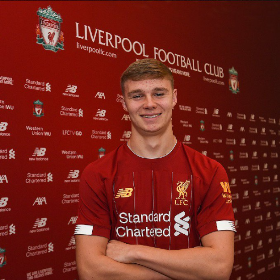 Liverpool have announced via their official website that promising striker Paul Glatzel has committed his future to the European champions by penning a new long-term deal.
The 18-year-old has signed a fresh contract as he continues his rehabilitation from a knee injury he suffered in a pre-season friendly against Tranmere Rovers on July 11.
Last season, Glatzel appeared for Liverpool's youth teams in the FA Youth Cup, U18 Premier League, UEFA Youth League, U18 Premier League Cup and Premier League 2, scoring 28 goals.
Speaking on his new deal, he said : ''I was disappointed to get my injury at the start of the season, but it's a great feeling and it shows that the club has got faith in me. Now I can just focus on my rehab and get back on the pitch.

"I've been at the club for so long and I just want to keep going and see where it takes me. Hopefully I can crack on now and keep going. The contract makes it easier.

"Mentally, it's good to be able to focus on the rehab and know that there's people that have faith in me and they know I'll come back from my injury stronger and I'll be ready when I'm back on the pitch.''
Paul Glatzel is eligible to represent Germany and England at international level.
Igho Kingsley
Photo Credit : liverpoolfc.com