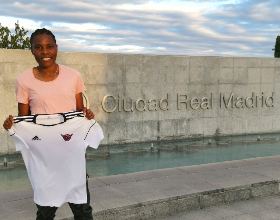 Swedish Damallsvenskan outfit Vaxjo DFF have informed through their official website that Nigeria international Ohale Osinachi is leaving the club for Real Madrid’s women's team, CD Tacon.
CD Tacon had been looking to bolster their defensive options following their heavy 9-1 defeat to Barcelona on the opening day of the new Primera División Femenina season.
Osinachi began her career at Nigerian powerhouse Rivers Angels before transferring to Delta Queens.
The 27-year-old moved to Houston Dash in 2014, before returning to Nigeria in 2015 for a second spell at Rivers Angels.
Prior to her move to Växjö DFF  in 2018, the rugged and pacy center back played for Vittsjö GIK.
Osinachi was a member of the Nigeria squads to the 2011, 2015 and 2019 FIFA Women's World Cups, and has won four Africa Women Cup of Nations titles with the Super Falcons.
Osinachi becomes the second player of Nigerian descent to sign for CD Tacon in the summer transfer window after former Arsenal striker Chioma Ubogagu.
Ifeanyi Emmanuel
Photo Credit : twitter.com/ChrisAtkins