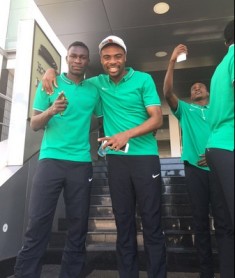 Tottenham Hotspur product Nathan Oduwa has explained that he opted to commit his international future to Nigeria over England because his parents are originally from the African country.
Oduwa was one of the exciting foreign-born players that trained with the Nigeria U23s ahead of the 2016 Olympic Games and earned his first cap in a friendly against Brazil in March 2016, before traveling with the squad to South Korea for the Suwon Invitational Tournament.
Prior to switching his international allegiance to Nigeria, the winger represented England's U17, U18 and U20 national teams.
When quizzed on the decisive factor when he made the decision to change from England to Nigeria, Oduwa told worldfootballindex.com : ''It is difficult to change when you spend many years coming through one system and then adapting to another.

''There is a new culture and new system, and even socialising with players in the first meet-up, but at the same time, my parents being of Nigerian origin, I want to represent the origin of my parents.

''It was always going to be a tough decision, but I feel very proud with the decision I have made.''
With the Super Eagles having a glut of attack-minded players at the moment, Oduwa has not yet made his senior debut for the three-time African champions.
Ifeanyi Emmanuel