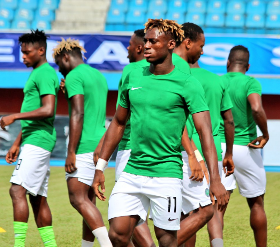 Nigeria U23 international Stephen Odey is relishing the prospect of facing holders Liverpool, Napoli and Red Bull Salzburg in the 2019-2020 Champions League.
Racing Genk have included the Mountain of Fire FC product on their roster for the group stage, which is a big plus for the striker as he targets a recall to the Super Eagles ahead of the Africa Cup of Nations qualifiers.
Last season, Odey was a key member of the FC Zurich side that reached the round of 32 of the Europa League, starting all their eight matches before they exited the competition at the hands of Napoli.
''It is a dream come true, what you watched several years ago and being part of the team for the Champions League is a very great privilege for me,'' said Odey to reporters after the Dream Team's 5-0 rout of Sudan.
Odey was missing from the national teams setup for a very long time until he has was invited for the recent U23 Africa Cup of Nations qualifiers against Sudan.
Although the 21-year-old didn't get to play the full game in Asaba, he was delighted that the team achieved their target of qualifying for the tournament in Egypt.
Odey added : ''The most important thing is that the team qualified to the AFCON. I am so happy that we made the fans and country proud''.
Igho Kingsley