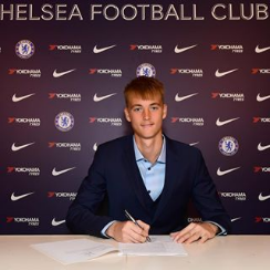 Highly-rated Finnish goalkeeper Lucas Bergström has extended his contract with Premier League side Chelsea.
The Finland youth international took to social media on Wednesday to confirm that he has signed a professional contract with The Blues.
''I’m honoured to have signed my first professional contract with @chelseafc last week,'' Bergström posted on Instagram.
Bergström, who celebrated his 17th birthday on September 5, has been offered a pro deal, two months after he penned scholarship forms with the Stamford Bridge outfit.
The 6ft 7ins tall glovesman posted a shutout on his debut in the U18 Premier League on the final day of the 2018-2019 season and started the first two games in the league this term.
He joined Chelsea from Turun Palloseura in his native Finland during the 2018-19 season.
Igho Kingsley
Photo Credit : instagram.com/lucas.bergstrom