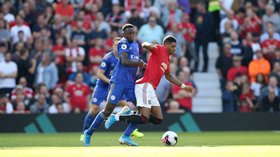 Leicester City couldn't maintain their unbeaten Premier League run as they were narrowly defeated 1-0 by Manchester United at Old Trafford.
The Red Devils haven't been in their best form in recent weeks but they managed to return to winning ways, thanks to Marcus Rashford's penalty in the eighth minute.

Super Eagles midfielderWilfred Ndidi took to Twitter to express his disappointment over the outcome of the game.

He tweeted  : ''Better days ahead 💙 🦊 🙏🏾''.
Ndidi is a regular in Brendan Rodgers' side this season but the same can't be said about his compatriot Kelechi Iheanacho who wasn't in the squad for today's game.

The former Manchester City striker is still searching for his first appearance in the Foxes jersey this season and will be hoping to see things change as soon as possible.