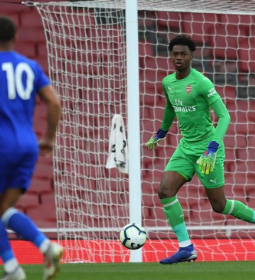 Two promising Nigerian goalkeepers did not feature for Arsenal youth teams in the latest round of matches due to injuries.
As previously reported by allnigeriasoccer.com, Arthur Okonkwo is undergoing rehabilitation after suffering an injury before the season started and was not considered for Arsenal's trip to United States because of the ailment.
Okonkwo, who celebrated his 18th birthday last week, was promoted to Arsenal U23 team in the new season and remains eligible to play for the U18s in the U18 Premier League.
He turned heads with a string of brilliant displays for Arsenal U23s at the tail end of the 2018-2019 campaign, posting three shutouts from his four appearances in the Premier League 2.
The Hale End Academy product has earned a reputation as a goalkeeper with cat-like reflexes and excellent passing skills.
Meanwhile, Jeorge Bird reports that Ovie Ejeheri, who is a first-year scholar, is also injured.  The shot-stopper has not been selected in a matchday squad this season..
The two goalkeepers are willing to play for the Nigeria National Teams if approached by the Nigerian Federation.
Ifeanyi Emmanuel
Photo Credit : arsenal.com