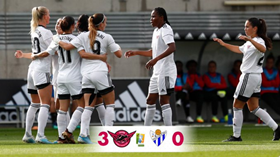 Ohale Osinachi, who has been described as a no-nonsense and pacy center back, has made her competitive debut for Real Madrid women team, CD Tacon.
The Super Falcons star went the distance as CD Tacon thrashed Sporting de Huelva 3-0 at the Ciudad Deportiva Real Madrid Campo 11 (Madrid) on Saturday, three days after completing her transfer from Vaxjo DFF in Sweden.
First half goals from Jakobsson and Martínez plus Asllani's 84th minute strike saw David Aznar's team secure three points.
There were weaknesses in the CD Tacon defence on the opening matchday in the Primera División Femenina as they conceded nine goals against Barcelona, which led to the team signing Osinachi and it is beginning to pay dividends to the club.
The victory against Sporting de Huelva was CD Tacon's first win in the Spanish top-flight since the formation of the club five years ago.
Sporting de Huelva midfielder Peace Efih and CD Tacon's Chioma Ubogagu started for their respective teams in yesterday's game.
In the provisional standings, CD Tacon are in eighth place while Sporting de Huelva are the bottom team in the league.
Ifeanyi Emmanuel
Photo Credit : clubdeportivotacon.com