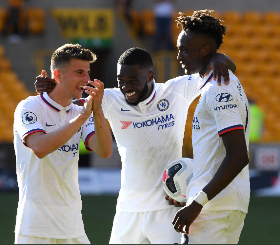 Fikayo Tomori has revealed that Argentina goalkeeper Willy Caballero played a part in his first Premier League goal for the club he joined fourteen years ago.
The experienced glovesman made fun of the central defender for missing several of his efforts during the training sessions in the buildup to the game at the Molineux Stadium in Wolverhampton.
Chelsea broke the deadlock in the 31st minute when an unmarked Tomori let fly from 35 yards and curled an unstoppable strike into the top corner.
''First up Azpi was calling me back to stop the counter-attack, and the ball broke out,'' Tomori said to Chelsea's official website.

''I thought ‘why not?’ and thankfully it managed to hit the back of the net. I’m obviously really pleased!

''In training the past couple of weeks Willy Caballero’s been giving me a bit because I’ve skied a few! I just wanted to concentrate on trying to keep it down and hitting the target.''
Prior to yesterday's game at Wolves, Tomori had scored 2 goals in 94 appearances as a professional.
Igho Kingsley
Photo Credit : chelseafc.com