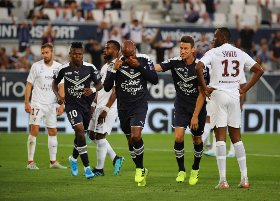 Premier League club Aston Villa embarked on a scouting mission in France to identify potential transfer targets ahead of the reopening of the transfer window.
Twitter account Scouts In Attendance has tweeted that an Aston Villa scout watched Bordeaux's 2-0 win over Metz at the Stade Matmut-Atlantique on Saturday evening without revealing the identities of the players they were monitoring.
Two Super Eagles stars featured for Bordeaux, with Samuel Kalu going the distance and newly capped Josh Maja coming on as a substitute in the 75th minute.
Maja had been linked with a host of clubs in the Premier League and Championship before opting to continue his career at Bordeaux in January.
According to Whoscored.com, Kalu took the most shots for Bordeaux, three in total, and completed two dribbles, a team high figure.
First half goals from Jimmy Briand and Nicolas De Preville gave Paulo Sousa his second win of the season.
The transfer window reopens in England on January 1 and comes to an end on January 31, 2020.
Ifeanyi Emmanuel
Photo Credit : girondins.com