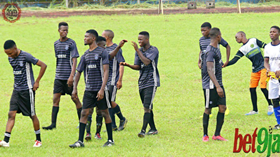 Harrison Chukwuji became the first player to score a hat-trick in the 13th edition of the Bet9ja Royal Cup, as Matchday One action entered Day 2 on Sunday, September 15, 2019.

Chukwuji displayed his rich vein of fine form in front of goal for God's Project FC in their fixture against MCC United at the Ogbe Primary School Field venue of the Uvwie Local Government Area.

The striker banged in his goals in the 15th, 25th, and 51st minutes to ensure that God's Project FC were in cruise control of the tie.

They will meet Young Warriors, who had beaten 5 - 4 PTI United on penalties, in the next stage of the qualifiers in Uvwie.