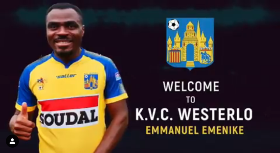 Belgian First Division B club K.V.C. Westerlo have announced the capture of former Nigeria international Emmanuel Emenike.
The financial terms and duration of contract signed by the striker have not been disclosed by De Kemphanen.
Emenike, who had been a free agent, was offered a contract after training with K.V.C. Westerlo for two weeks.
The 2013 Africa Cup of Nations top scorer lists Karabükspor, Fenerbahçe, Spartak Moscow, Al Ain, West Ham, Olympiacos and Las Palmas among his previous employers.
Prior to his move to Europe in 2009, he wore the colours of Delta Force, Mpumalanga Black Aces and FC Cape Town.
Emenike is credited with 37 appearances for Nigeria and scored nine goals and was part of the Super Eagles squad to the 2014 World Cup.
Igho Kingsley
Photo Credit : kvcwesterlo.be