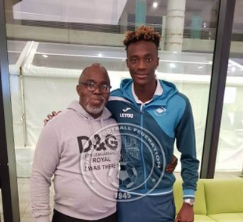 A big question lies ahead of Tammy Abraham who is now debating whether he will return to play for Nigeria.

Abraham is faced with a tough choice by the look of it. Having won two international caps for England, the soccer player is now debating whether he should join his native country’s squad to face off some serious challengers.

The young Abraham, aged only 21, is considered to be one of the best Under-21 at the European Championships.

Debating on whether he will make the bold move, Abraham said that his focus wasn’t quite there yet.

Chelsea, the club he currently plays for, has also been uncertain about the future prospects of the Abraham – regarding Nigeria specifically.

However, nobody has fully ruled out the possibility. Meanwhile, Nigeria Football Federation president Amaju Pinnick said that Abraham will have the opportunity to play regularly for Nigeria, and perhaps more often so than for England.

Nigeria is now facing some tough matches ahead, including against Brazil.

If you love to bet on sports and online sports betting in general, you might want to prepare yourself, because Nigeria will be involved in some pretty interesting games.

Meanwhile, Chelsea’s boss, Frank Lampard, gave a press conference in which he said that Gareth Southgate, England’s national soccer coach, is going to want Abraham on the national team in all likelihood.

As it turns out, young Abraham has a lot of decisions to make. He will boost his country’s performance significantly if he chooses to play for Nigeria. Yet, England might give him better opportunities.


For you as a fan, all that is left is to find a great sport betting site and place your wagers.
Igho Kingsley