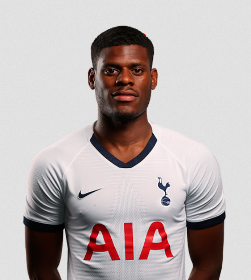 Tottenham Hotspur rising star Timothy Eyoma has become Nigeria's all-time highest appearance-maker in the prestigious UEFA Youth League.
An England youth international, Eyoma has been included in the starting line-up in the ongoing game against Olympiacos at the Olympiacos FC Training Centre - Piraeus, which has taken his total appearances in the competition to 21.
The central defender matched Ola Aina's appearance record of 20 games when he started for Spurs in their 2-0 loss to Porto in a round of 16 clash on March 13, 2019.
Eyoma made his UEFA Youth League debut against Monaco in September 2016.
The 2003-born player made his first team debut for Tottenham Hotspur against Tranmere Rovers in an FA Cup clash back in January and was included in the 18 for the Premier League match against Burnley in December 2018.
Behind Eyoma and Aina in the standings is Manchester City's Tosin Adarabioyo with 19 appearances.
Meanwhile, goalkeeper Joshua Oluwayemi started for Spurs in the ongoing game while striker Kion Etete has been named among the substitutes.
Ifeanyi Emmanuel
Photo Credit : tottenhamhotspur.com