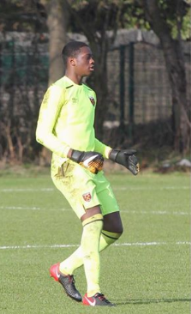 Allnigeriasoccer.com understands that former Chelsea wonderkid Daniel Jinadu has been included on Nigeria's provisional roster for the 2019 FIFA U17 World Cup.
Golden Eaglets chief scout, Bunmi Haruna advised coach Manu Garba to include Jinadu, who is now at West Ham, on the 50-man provisional squad for the tournament in Brazil.
The 17-year-old will undergo a Magnetic resonance imaging (MRI) test when the players and officials return from their trip to Turkey for the UEFA Assist U17 International Tournament.
Although Jinadu was a latecomer to the team, one thing that he had going for him was his experience, having previously worn the colours of England U15 and U16 teams.
In addition, the goalkeeping department was one of the problem areas during the U17 AFCON and regional qualifiers, with the team conceding 13 goals in total.
The other foreign-based player named in the provisional squad is Bournemouth's Joseph Oluwabusola.
Shrewsbury Town first-year scholar Nigel Aris impressed coaches Manu Garba, Nduka Ugbade and Jolomi Atune but was eventually axed from the provisional squad because of the short time he spent with the team during the training camp.
The Golden Eaglets players and officials are expected to leave for Turkey on Friday, September 20.
Ifeanyi Emmanuel