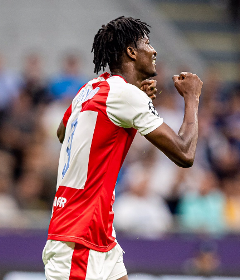 Nigerian striker Peter Olayinka was awarded the highest possible rating of 10 following his outstanding display on his Champions League debut against Inter Milan on Tuesday, according to the official website of UEFA making reference to Sport.
The former Gent man gave the visitors the lead at the San Siro and they were very close to securing all three points if not for Nicolo Barella's equaliser in the second minute of stoppage time.
Speaking post-match, Olayinka was disappointed that Slavia Prague surrendered their lead to draw 1-1 but it was dream come true for him to score at the Stadio Giuseppe Meazza (Milano).
The number nine said : ''You know, right after the goal I just watched the linesman to see if it was an offside. After that a lot was going through my mind. Wow, it’s unbelievable.
''As a kid, I was watching San Siro on TV, and this moment just felt so great I could not believe it. After that the referee went to check VAR and I was like ´please, don’t stop this feeling´, because I was feeling so excited.
''And when the goal was confirmed I could finally calm down and I felt happy, it was fantastic''..
Peter Olayinka and his Slavia teammates welcome Borussia Dortmund to the Sinobo Stadium in their next Champions League game on October 2.
Igho Kingsley
Photo Credit : slavia.cz