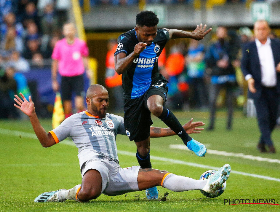 Allnigeriasoccer.com's round-up of the Nigeria-eligible players who were on parade for their respective clubs on matchday one in the UEFA Champions League on Wednesday, September 18.
In one of the evening kickoffs, attack-minded duo David Okereke and Emmanuel Dennis both started for Club Brugge in their goalless draw vs Galatasaray at Jan Breydelstadion.
In the second half Okereke had a chance to score the winner but was denied by a fine save from Muslera. He was replaced on the hour mark and was joined on the bench by Dennis 13 minutes later.
In a Group C clash at Stadion Maksimir, Iyayi Atiemwen was on the bench as Dinamo Zagreb registered a comprehensive 4-0 win against Atalanta, who were making their debut in the group stage.
Leovac opened the scoring for the home team on 10 minutes before Orsic scored a hat-trick to make it 4-0.
Over to Group D. Super Eagles defender Brian Idowu came off the bench in the third minute of second half stoppage time as Lokomotiv Moscow secured all three points with a 2-1 win against Bayer Leverkusen at BayArena in Germany.
Krychowiak gave the Russian team the lead in the 16th minute but an own goal from Höwedes leveled the match in the 25th minute.
Barinov scored what proved to be the winning goal eight minutes before half-time.
Ifeanyi Emmanuel
Photo Credit : clubbrugge.be