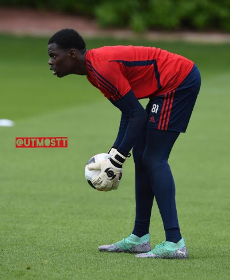 Allnigeriasoccer.com has been told that Arsenal youth-teamer Ovie Ejeheri is hoping to return to action next month after suffering an injury.

The goalkeeper's progress at the Emirates Stadium has been hampered by injuries but he remains highly rated by the Gunners coaching staff, so much so that he was offered a scholarship before the start of the 2019-2020 season.

Ejeheri is currently undergoing rehabilitation from a small tear in his medial meniscus.

The 16-year-old has not been involved in an official match for Arsenal's youth teams this term and is set to miss at least three more games against Brighton, Wolves and Reading.

He was expected to provide competition for Karl Hein and Hubert Graczyk prior to his spell on the sidelines.

The promising glovesman first made the bench for an U18 Premier League fixture while still a schoolboy back in the 2017-2018 season.


Ejeheri is the second goalkeeper of Nigerian descent recovering from injury, the other being England youth international Arthur Okonkwo.
Ifeanyi Emmanuel