...the complete Nigerian football portal
Subscribe
Why Lookman Did Not Feature In RB Leipzig's 2-1 Victory Over Benfica
Published: September 19, 2019 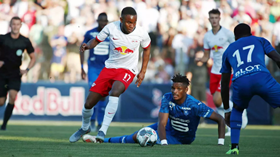 RB Leipzig started their 2019-2020 Champions League campaign on a bright note as brace from Timo Werner gave them a slim victory over Benfica on Tuesday.

Though the Bundesliga side will be happy with the result, Nigerian star Ademola Lookman won't be too impressed as he was an unused substitute throughout the game.

That has been the story with the former Everton winger since his move to RB Leipzig, and manager Julian Nagelsmann has revealed the reason behind the player's lack of game time.

According to the manager while speaking to Kicker, the player needs some time to be fully fit for regular action because he didn't get much actions during the latter stages of his career at the Goodison Park last season.

''Some (new signings) still need a bit of development time because they did not have the regular game time at their previous clubs.

"With a player like Ademola Lookman, who played very little at Everton, it takes more time than with Christopher Nkunku, who made 29 games at PSG last year. That’s completely normal, '' he said.

He also claimed that Lookman, and other new signings, require much to settle into his plans, no thanks to language barrier.
''Experience has shown that newcomers usually take a little longer to get along with what I want. We have many video sequences with text attached. And then it is not easy if you can't speak the language yet,'' he concluded.


Lookman has tasted  just 11 minutes of action so far this season but he will hope to be involved in their next game against Werder Bremen on Saturday.
Ibukun Italoye
Photo Credit : bundesliga.com