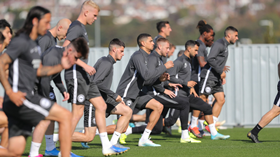 Nigeria manager Gernot Rohr has received more good news before he announces his roster for a glamour friendly against five-time world champions Brazil in Singapore.
Brighton & Hove have published training photographs which seemingly confirm that Leon Balogun has resumed full training ahead of Saturday's trip to Newcastle United.
The central defender's participation against Brazil had been covered in mist after he had a bit of tightness in the build up to the match against Ukraine and he eventually made a swift return to England to undergo treatment.
The matchday six tie at St. James' Park may come too soon for Balogun but he has three more games to prove his fitness ahead of the friendly with the South Americans.
His only appearance to date for Brighton & Hove in the new season was against Bristol Rovers in the League Cup.
Things have not gone smoothly for the former Mainz man since his move to the Seagulls in the summer of 2018 as he has managed only five Premier League starts from a possible 43 and has found himself behind William Troost-Ekong and Kenneth Omeruo in Rohr's pecking order of central defenders.
Balogun's pal, Troost-Ekong is back in full training with Udinese after sustaining a minor muscle problem in the friendly against Ukraine.
Ifeanyi Emmanuel
Photo Credit : brightonandhovealbion.com