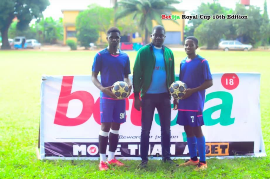 Stars were bundled out of Delta's premier grassroots soccer tournament 4 - 2 on penalties by Jeremi United.

This came after a heated 90 minutes encounter between both sides 24 hours earlier at the Otu-Jeremi Primary School Field in Jeremi.

Due to the body of water retained in both goal areas of the Jeremi pitch, the tie was eventually concluded on penalties at the DSC Mobile Camp grass turf in Orhuwhorun on Thursday, September 19, 2019.

With this result, Jeremi United are now through to the group stage of the competition.

Henry Chibuike and Victor Samba each scored a hattrick to ensure safe passage for 90 FC to group stage in the thrilling fixture at the All Saints Anglican Church field, Cable Point, Asaba.