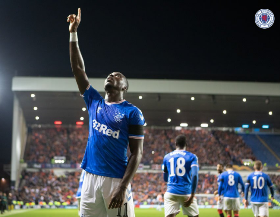 Scottish side Glasgow Rangers defeated Eredivisie side Feyenord 1-0 during their Europa League opener at Ibrox Stadium.
Steven Gerrard's men dominated the game in opening minutes of the encounter but they couldn't find a breakthrough until in the 23rd minute when Nigerian star Sheyi Ojo scored a beautiful goal.


The youngster almost scored his second goal of the night but his shot hit the woodwork before the break.
It ended 1-0 in favor of the Gers and their manager was pleased with Ojo's well-taken goal.
According to the Liverpool legend, Ojo is a game changer which is one of the reasons why he decided to lure him away from the Anfield Stadium during the transfer window.


''He is a game-changer – whether that be through an assist, a dribble or through a strike like he did tonight,'' said Gerrard to Rangers official website.
''That’s the reason why I brought him in as he can make the difference in the final third and he could have had another one.''
He added : ''I’ll be onto him over that – but that’s Sheyi. Sheyi is the type of player where one or two things might go wrong and then he’ll put one in the top corner from 25-yards.
''Get used to it and get behind him – that’s what he can do.''
Ibukun Italoye
Photo Credit : rangers.co.uk