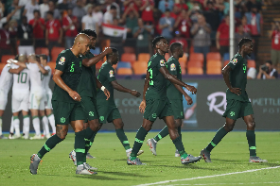 Nigeria manager Gernot Rohr has identified seven players he intends to include on his roster for next month's glamor friendly against Brazil at the National Stadium in Singapore.
The likes of William Troost-Ekong, Semi Ajayi, Ola Aina, Jamilu Collins and the three goalkeepers named in the squad for the friendly against Ukraine in the shape of Francis Uzoho, Ikechukwu Ezenwa and Maduka Okoye are expected to be in the traveling group.
Benfica's Tyronne Ebuehi is an injury worry for the Super Eagles while captain Ahmed Musa has been inactive since he sustained an injury in a league game against Al-Fateh on August 30.
In an interview with Sporting Life Nigeria, Rohr stated : ''Most of the players who played against Ukraine like the vice-captain of the team Troost Ekong, Semi Ajayi, Ola Aina, Jamilu Collins, Francis Uzoho, and the other two goalkeepers will be recalled to battle against Brazil.

''Some of these players will be invited again now to play against Brazil because they did so well against Ukraine''.
Brazil national team coach Tite will announce his roster for the friendlies against Senegal and Nigeria on Friday, September 20.
In the latest FIFA world rankings, Brazil and Nigeria dropped one place, with the South Americans now ranked third and the three-time African champions 34th globally.
Igho Kingsley