...the complete Nigerian football portal
Subscribe
Brazil Coach Explains Why Neymar, 3 Other Players Were Called Up For Friendly Vs Nigeria
Published: September 20, 2019 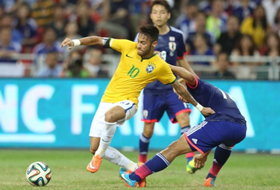 Brazil coach Tite has revealed the rationale behind his decision to include Paris Saint-Germain super star Neymar on his 23-man roster for the friendlies against Senegal and Nigeria next month.
Neymar angled for a return to Barcelona in the summer transfer window, however, the proposed move did not materialize and the striker has played only game this season as a result of the previous uncertainty surrounding his future.
Amidst the summer soap opera involving Neymar, Barcelona, Real Madrid and PSG, the player received a call-up for Brazil's games in September and impressed in their season opener against Colombia, scoring and providing an assist.
''Neymar is happy in the national team, I can talk about the national team, he is happy here,'' said Tite to reporters at Friday's press conference.

''He has no control over other situations because we have no control. But he demonstrated it in games''.
Flamengo defender Caio is making a return to the squad and two exciting 21-year-olds in Gremio's Matheus and Atlético de Madrid's Lodi are in line to make their international debuts next month.
'' Rodrigo Caio has been returning to a very high standard he had in the Brazilian team.
''Lodi is a young player we are following at Atletico Madrid, has the technical and physical virtues of great players..
''Matheus is within a line we like a lot, he's an articulator, very large pass capacity and mobile,'' Tite explained.
Brazil's 17-match unbeaten run came to an end when they lost 1-0 to Peru in their last international match in September.
Ifeanyi Emmanuel
Photo Credit : cbf.com.br