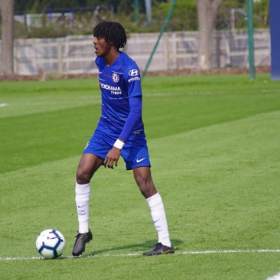 Ola Aina's sibling, Jordan Aina has finally played his first game for Chelsea in the 2019-2020 season.
The former England U16 international came off the bench in the 80th minute as a replacement for Valentino Livramento as the Young Blues claimed a narrow 2-1 victory against Reading in the U18 Premier League on Saturday afternoon.
Jordan Aina was not in the Chelsea U18 team for their first five matches of the new season and was omitted from the squad held to a 3-3 draw by Valencia in the UEFA Youth League on Tuesday.
Dion Rankine opened the scoring for the hosts on 33 minutes, Nunn added a second midway through the second half, before Pedro Neves halved the deficit at minute 76 to set up a nervy ending to the game.
Goalkeeper Kelechi Chibueze and Golden Eaglets invitees Prince Adegoke and Adrian Akande were not in Chelsea's matchday squad against the Royals.
Chelsea U18s have won five of their first six matches and sit second in the table with 15 points, one behind Fulham and Brighton & Hove.
Igho Kingsley
Photo Credit : Instagram/jordan.aina