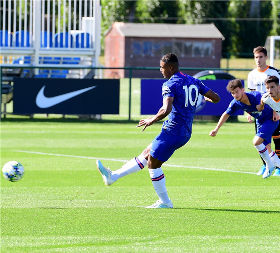 Faustino Anjorin played for fourteen minutes as Chelsea beat Southampton 2-0 in the Premier League 2 on Saturday to extend their club record for the longest unbeaten start to a Premier League 2 season.
Andrew Myers' side have not tasted defeat in the Premier League 2 in the 2019-2020 campaign after six rounds and Anjorin has played a huge part as he has been involved in all the matches.
Having said that, the England U19 international has to be content with a substitute's role for now as he's playing second fiddle to Hudson-Odoi, who made his second start for the U23s against the Saints as he steps up his recovery from a long-term injury.
For the second game in succession, Hudson-Odoi was replaced by the Nigeria-eligible midfielder.
Hudson-Odoi and Mola scored second-half goals to send Chelsea top of the Premier League 2 table again, ahead of Everton and Arsenal who both played earlier on Friday.
Tariq Uwakwe who started Chelsea U23s first four games this season was not in the squad vs Southampton, he also missed last weekend's tie against Brighton & Hove.
Chelsea return to Premier League 2 action when they face Leicester City on September 28.
Ifeanyi Emmanuel
Photo Credit : chelseafc.com