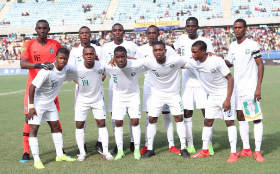 Allnigeriasoccer.com understands that Bournemouth Academy product Joseph Oluwabusola is in line to play for the Golden Eaglets at the UEFA/CAF U17 International Tournament.
The 2003-born player flew to Turkey on Friday and was accompanied by his father.
As previously reported by this website, Oluwabusola was previously excused from the Nigeria U17s camp because of his educational commitments back in the United Kingdom.
He is in direct competition with Sunday Stephen and Suleiman Shaibu for the goalkeeping position and expected to have more competition, with West Ham's Daniel Jinadu set to resume training with the Golden Eaglets when they return from Turkey.
The Golden Eaglets UEFA/CAF U17 International Tournament squad is dominated by players who were in Tanzania for the 2019 U17 AFCON.
Samson Tijani, Akinkunmi Amoo, Fawaz Abdullahi, Wisdom Ubani and Divine Nwachukwu are among the familiar names in the Golden Eaglets 21-man squad list.
Nigeria U17s will face hosts Turkey (Sept 22), Guatemala (Sept 24) and Senegal (Sept 26) in Group 1 of the World Cup preparation tournament.
Nigeria U17 21-Man Squad For UEFA/CAF Tourney