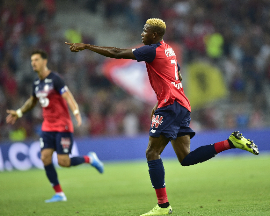 Ahead of Lille's Ligue 1 clash against Rennes on Sunday afternoon, Super Eagles striker Victor Osimhen has expressed his elation at being compared to Arsenal's record signing Nicolas Pepe.
Osimhen was bought by the French side as replacement for the Gunners' £72m acquisition and is already repaying the decision to snap him up from Belgian  Pro League outfit Sporting Charleroi.

Osimhen was speaking at the press conference on Saturday evening where he expressed gratitude for the trust in him.

"Big respect to Nicolas Pepe for what he did for the club," Osimhen who has scored five league goals in five appearances said at the press conference as quoted by InsideFutbol.com.

"Like a lot of people say, I'm replacing Nicolas Pepe, he scored some beautiful and wonderful goals, but I think I am near to bringing in my own qualities to the team.

"Nicolas Pepe and Victor Osimhen are quite different players, so it's OK if ever some people try to compare me and him.

"I feel good to be compared to such a great player.
Lille are placed seventh in the table with nine points but could rise to second place with an emphatic win away at fourth placed Rennes.

Interestingly Pepe, who is yet to score a goal for Arsenal after five league and one Europa League games, albeit is expected to start in Sunday's match against Aston Villa.

Osimhen is under contract until the summer of 2024 at the French club.