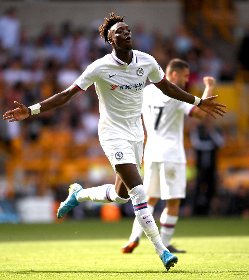 Former Wimbledon FC of England striker John Fashanu has unequivocally warned Chelsea's rising star Tammy Abraham over his choice of country in deciding his international career.
Abraham has a Nigerian father, who incidentally is friends with the president of the Nigeria Football Federation, Amaju Pinnick.

However the Chelsea striker is being penciled down for a future England call-up but Fashanu who choose England over Nigeria and eventually played just two international matches for The Three Lions has advised the youngster to learn from his mistakes.


"I realized that I could not play the Nigerian football. I was happy that as a black Nigerian, I would be able to break into the English national team.
''Possibly one of the best and biggest country in the world certainly then it was wonderful. To play with Paul Gascoigne, Peter Shilton, they were legends.
"So I say to Tammy, think very well. When I went to play for England I could have played 100 games for the Super Eagles.

Some English Premier League stars, past and present, who failed to play or play long term for England after turning down Nigeria include Gabriel Agbonlahor, late Ugo Ehiogu, Nedum Onuoha and Jordon Ibe.

Nigeria will face a star studded Brazil side in an international friendly on 13 October at the Singapore National Stadium.

Abraham has scored seven Premier League goals in the current 2019/2020 season and was not considered for the 2018 World Cup by England.