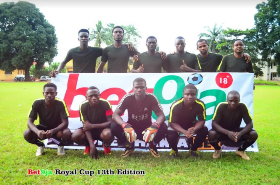 The Chief Executive Officer of Maro11 Speedstar Academy, Precious Echewa, has rated the 2019 Bet9ja Royal Cup very high, saying that the level of competition among all 108 teams who took part in the qualifiers is impressive.
Echewa, who said this immediately after his side qualified for the group phase of the grassroots soccer tournament at the expense of Amazing Grace FC, said the brand of good football most teams play is incredible.

He noted that the competition has proven to many that abundant talents waiting to be exposed are in Delta State, adding that these players are very prepared to hit the ground running in a well organized setting.


"The level of this tournament is very high, the competition among all teams is totally unbelievable,'' said Echewa.
"I'm wowed by what the Academy teams are doing. I'm happy my team is in this category.

"There are raw talents here. This edition of the Royal Cup has proven this fact.''

He added : "The world should come and see for themselves what we've got in Delta. The very best of Under 16 players are here in our academy."

"These players are not scared of playing in any good league in the world."

The young grassroots soccer tactician charged the remaining academy teams to dare to believe against the so called big teams who are through to the group phase of the competition.

Maro11 Speedstar Academy have qualified for the group stage and they will fly the flag of Ughelli North in this phase of Delta's premier grassroot football showpiece.