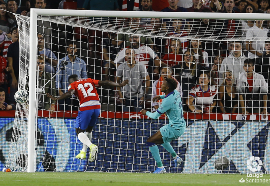 Barcelona have made their worst start to a La Liga campaign for twenty five years following their 2-0 loss to Granada at Estadio Nuevo Los Cármenes on Saturday evening, a result that leaves the Spanish champions with seven points from five matches.
Nigeria international Ramon Azeez gave the home team the lead on 2 minutes when his header from close range beat goalkeeper Marc-André ter Stegen.
The two leading sports newspapers in Spain are blaming Barcelona number 24 Junior Firpo for the goal scored by the Nigerian midfielder.
Marca wrote : ''A Junior Firpo mistake led to Granada opening the scoring in just the first minute of their game against Barcelona.

''The former Real Betis left-back stumbled and fell to the ground which allowed Antonio Puertas to cross for Ramon Azeez who headed home''.
Diario AS tweeted : ''Goooooooooool! Granada take the lead inside 60 seconds! Horrible mistake from Junior Firpó with his first touch in a Barça shirt and Ramón Azeez pounces to give the hosts the lead!''
With his strike against Barcelona, Azeez has now scored four goals in the Spanish top-flight since his debut back in the 2013-14 season and is the tenth highest scoring Nigerian in La Liga history.
Ifeanyi Emmanuel
Photo Credit : granadacf.es