...the complete Nigerian football portal
Subscribe
Watford Striker Will Not Be Recalled To Super Eagles Squad For Friendly Vs Brazil
Published: September 22, 2019 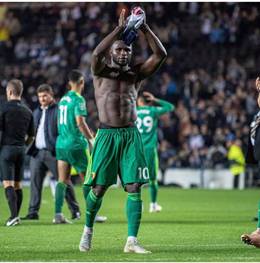 Watford striker Isaac Success will definitely not be recalled to the Super Eagles squad for their friendly against five-time world champions Brazil on October 13, allnigeriasoccer.com reports.
The former Golden Eaglets and Flying Eagles star faces at least one month on the sidelines after sustaining a groin injury.
And as a result of the ailment, Success has not figured for the Hornets in the Premier League since August 31, missing the 2-2 draw with Arsenal last weekend and the 8-0 hammering by Manchester City on Saturday.
The BJ Foundation product has not played for the Super Eagles since November 2018 when he lasted 45 minutes on the Stephen Keshi Stadium turf in a pre-Africa Cup of Nations friendly against Uganda.
Success's former strike partner in the Golden Eaglets class of 2013, Kelechi Iheanacho is unsure if he's in Gernot Rohr's plans for the friendly as he has been inactive for Leicester City since the start of the season.
Meanwhile, Leon Balogun and William Troost-Ekong have returned to full training but were not in action for Brighton & Hove and Udinese respectively on Saturday.
The two central defenders sustained minor injuries while on international duty about two weeks ago.
Ifeanyi Emmanuel