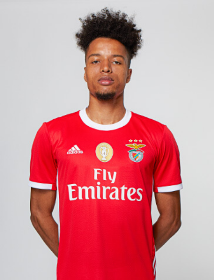 Super Eagles star Tyronne Ebuehi has worn the Benfica shirt for the first time in a competitive match, approximately fifteen months after joining the Portuguese setup as a free agent.
The right fullback started for Benfica U23s in their 2-1 victory against Académica U23 in a Liga Revelação match held at Caixa Futebol Campus (Seixal) on Saturday, September 21.
Wearing the number 2 jersey, he made way for Vilius Armalas before the start of the second half.
Signed from ADO Den Haag in the summer of 2018, Ebuehi suffered a serious injury in pre-season and did not play an official match for Benfica throughout the 2018-2019 campaign.
The 23-year-old underwent pre-season training with the Benfica first team prior to the start of this season but it wasn't long before he returned to the sidelines after suffering a muscle injury.
Ebuehi was forced to withdraw from the Nigeria squad for the friendly against Ukraine because of the injury.
Depending on the defender's physical condition, he could be reintegrated into the Benfica first team in the coming weeks.
Ifeanyi Emmanuel
Photo Credit : slbenfica.pt