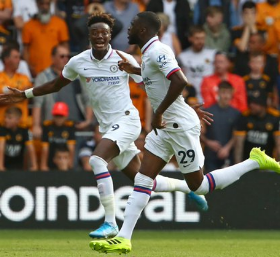 Chelsea boss Frank Lampard singled out Fikayo Tomori, N'Golo Kante and Marcos Alonso for special praise despite his side's 2-1 loss to Liverpool in the Premier League on Sunday evening.
Tomori was put in charge of stopping Africa's finest footballer Mohamed Salah from scoring and the central defender passed the test with flying colours as the Egyptian fired blanks at Stamford Bridge.
With first choice central defender Antonio Rüdiger sidelined, Tomori partnered Andreas Christensen in the center of defence, only for 42 minutes though as the Dane had to be replaced by Kurt Zouma after he suffered a knee injury.
On Tomori, Lampard told reporters at the post-match press conference : ''I also want to single out Tomori for me personally.
''To go up against Mo Salah who is lethal in every sense and deal with him for pace in the mind, the way he played, everything he did today I thought was class and they are the signs I’m looking for individually, I thought his performance was brilliant and Alonso I thought came on and did very well, its not easy coming on in a big game like that but I thought he did very well."
Tomori's overall display against Liverpool was more impressive if you consider the fact that he was walking a tightrope for 70 minutes after he was shown a yellow card.
The 21 year-old has all the qualities of a modern day central defender; good passing skills, pacy and aggressive.
Igho Kingsley
Photo Credit : chelseafc.com