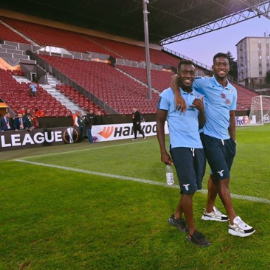 Nigerian-born winger Bobby Adekanye made his debut for Lazio in the Italian Serie A on Sunday, September 29.
Lazio coach Simone Inzaghi handed a first appearance to the former Liverpool starlet when he came off the bench in the 86th minute of his side's 4-0 rout of Genoa on game week six.
The Biancocelesti were leading 4-0 through goals from Sergej Milinkovic-Savic, Stefan Radu, Felipe Caicedo and Ciro Immobile when Adekanye hopped off the bench.
The 20-year-old was an unused substitute in previous Serie A matches against Sampdoria, Parma and Inter Milan and made his professional debut against CFR Cluj in the Europa League on September 19.
He was frustrated by the lack of first-team opportunities and opted to leave Liverpool as a free agent in the summer despite being offered a three-year contract to extend his stay.
The exciting winger brightened his chances of playing regularly for Lazio's first team after scoring a hat-trick in a friendly against Biancoceleste Primavera about three weeks ago.
Lazio sit sixth in the standings with ten points, eight less than league leaders Inter Milan.
Igho Kingsley