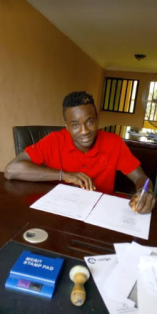 The striker has put pen to paper on a two-year deal after both parties agreed terms.

President of Right2Win Academy Engr. Kelechi Nnorom Orji heaped praises on the player, adding that his hard-work and resilience paid off.

"The move was always going to happen, a young and decent player with prospects will always attract top clubs, and here is another evidence that at Right2Win Academy, we do a professional job with our players and ensure they get the best deals. A lot of talents are still available and will move at the right time".

The player's representative Mr. Eddie Ogbemudia said "Let me give kudos to the two parties for taking Professional steps and procedures, I'm glad that this is happening. Our duty is to put the players through the professional way of being contracted, and like I said, the level of professionalism at Right2Win Academy is highly commendable so it gives room for more talents to make the move".

Right2Win Academy have over the years been described as the talents hub for players in the South East.

The Abia State based sports academy is now enlarging their coast to becoming a force to reckon with in the country as far as discovering, nurturing and putting players on a professional path is concerned.