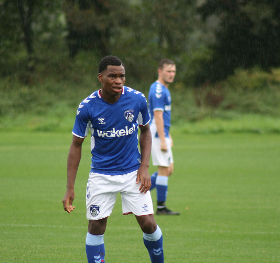 Allnigeriasoccer.com has been told that the Nigeria Football Federation have handed a late call-up to Sheffield United Academy product Robert Oseh ahead of the team's trip to São Paulo for the final phase of preparations for the upcoming FIFA U17 World Cup.
Golden Eaglets coaching staff led by Manu Garba have started running the rule over the attacking midfielder but it is understood that he is unlikely to be make the final 21-man roster.
This website can exclusively report that 'some bigwigs' forced the Nigerian Federation to invite Oseh to the training camp in Abuja; something which has displeased the Golden Eaglets officials who have labelled him not good enough to make the team.
Oseh was on the books of Sheffield United until the summer of 2019 when he left The Blades to join Oldham Athletic on a scholarship deal.
The 16-year-old's trip to Abuja has the blessings of Oldham Athletic's higher-ups and they are confident he will be heading to Brazil with the five-time world champions at U17 level.
Oseh is capable of playing as an attacking and defensive midfielder, and the Nigeria U17s are not lacking quality in that department.
Ifeanyi Emmanuel
Photo Credit : oldhamathletic.co.uk