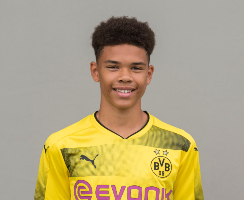 Promising Borussia Dortmund defender Pharrel Nnamdi Collins has received a maiden call-up to Germany's U16 national team, allnigeriasoccer.com reports.
DFB coach Michael Prus has named Collins in a 20-player squad for a training camp in Finland as well as two international matches against the hosts on October 9 and October 12.
In August 2019, the 15-year-old was placed on standby for the friendlies against Austria but he is now set to make his international debut for that age group this month.
Having registered two goals in 8 appearances with one assist to his name, he has been rewarded for his brilliant form in the B-Junioren Bundesliga West.
Meanwhile, right back Felix Agu has been invited to the Germany U21 squad for the international matches against Spain (friendly) and Bosnia-Herzegovina (European Championship qualifier) on October 10 and October 15 respectively.
If the VfL Osnabrück rising star plays against Bosnia-Herzegovina and wants to represent the Super Eagles in future, he has to file a one-time switch.
Hamburg's Jonas David has been named in Germany U20 squad for the internationals against Poland (October 10) and Switzerland (October 13).
Igho Kingsley
Photo Credit : bvb.de