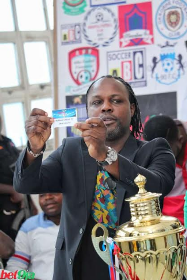 All remaining 32 clubs in the 2019 Bet9ja Royal Cup have been paired separately into eight groups of four teams each.

This was part of the private draw ceremony held at the Warri City Stadium on Thursday, October 3, 2019.

Group A and Group B teams will taste the action at the Agbor Township Stadium, with Selected All Stars FC of Patani, Young Stars FC, Sundof Academy of Oleh, and Bobbies United of Warri in Group A and Unity FC of Asaba, Rolly FC of Koko, Visionaries FC, and Henfield Academy, Umutu, all in Group B.

The Kwale Township Stadium will host all Group C and D fixtures.

Delta Eagles FC of Ozoro will have the herculean task of playing Golden Albion of Udu, Ekete United of Udu, and All Stars International FC of Effurun in Group G at the Warri City Stadium.

The Warri City Stadium will also treat us to the spectacle of Young Shall Grow FC in Group H trying to brave the odds in the form of God's Project FC of Effurun, MWF FC De Titans of Abraka, and  high flying Mega FC of Asaba.

All group games will commence on Monday, October 14, 2019 across all designated centers in Delta State.